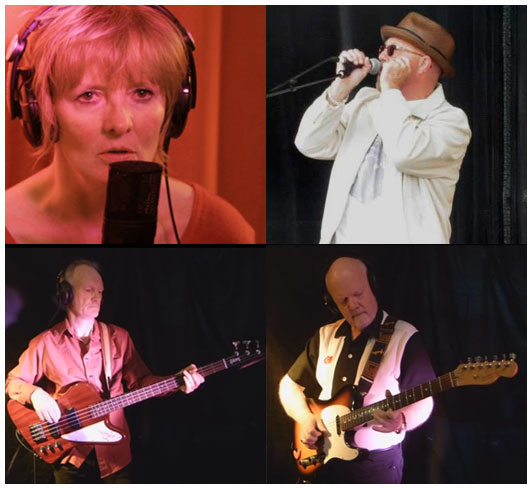 This page features two videos of songs I recorded with Celia Bryce (wearing headphones, left) and some of my personal projects on my SoundCloud account. There will be more added as time goes on, particularly from my current song writing collaboration with Les Young. 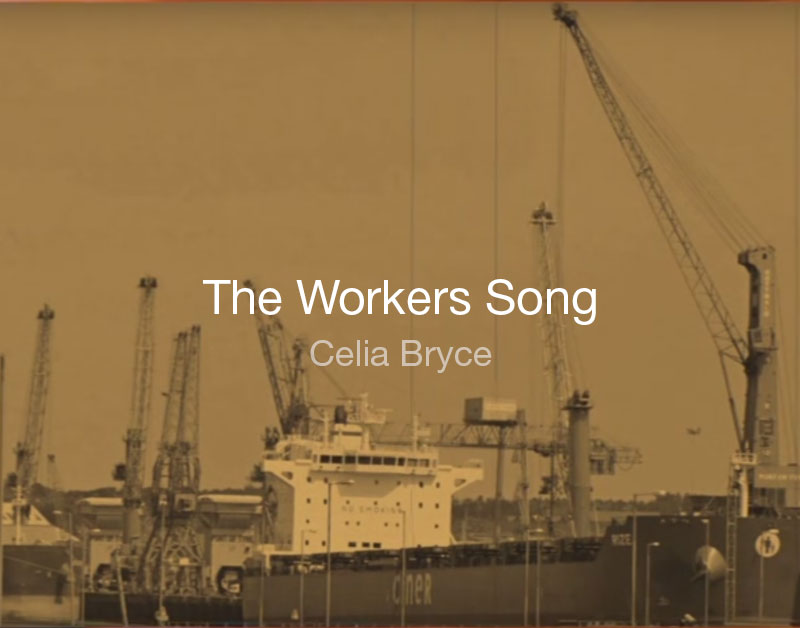 “The Workers Song” is from the “Links” album, so called because most of it was written at Newton Links, Newton by the Sea. A 4 day blitz that netted the bulk of the Album. I play guitar and banjo, Celia played accordion and sang it, and they are her lyrics of course. Drums were by Doug Morgan, Colin plays bass and a “wall of” acoustic guitars. 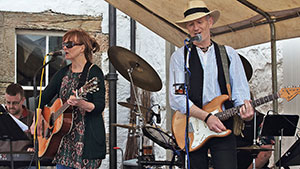 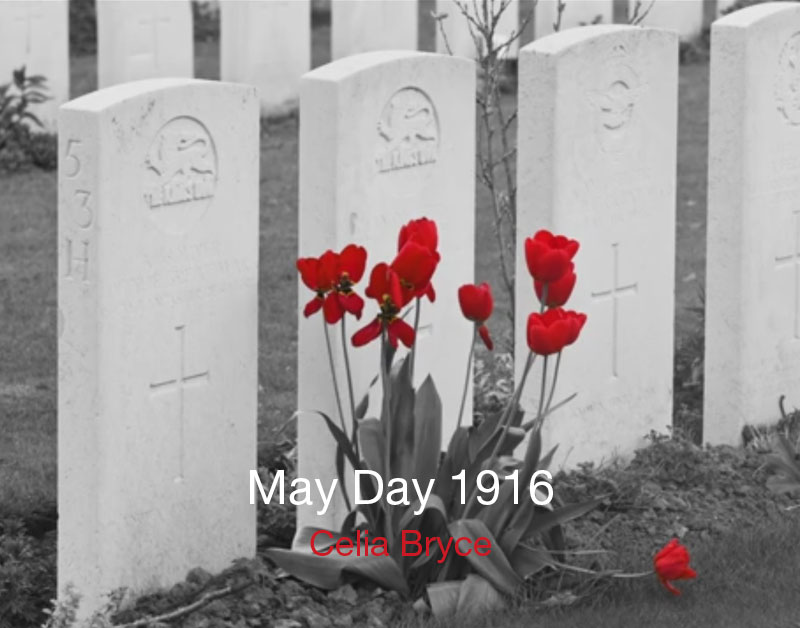 “May Day 1916” came about as a result of another weekend writing session. Celia was researching the First World War for a novel she was writing. When I played the tune she was taken with it and had most of it written in 15 minutes while Colin and I messed about with some technology neither of us understand yet! The song was donated to the Royal British Legion who would have kept all royalties but they are a large group and didn’t promote it. The recording was me on guitar, Celia on vocals ( first take including the glorious harmonies) and Gary Young (and family) providing the brass band. Gary plays on other tracks on the Links album and on “I’ll be your mountain” on the Vanity Project

I’ve loved music as long as I can remember.
My parents had a gramophone with a “78” deck and a massive speaker. Saturday mornings people like Brian Matthews and before him on a children’s music programme , would play Tommy Steele and Lonny Donegan and that bass would rumble through the whole house. Then came the Beatles and we got the deck upgraded to play “45”s and “33 and a thirds” i.e. albums. The day I finished Primary school to go to grammar school, I remember my mother had bought a copy of “A hard days night”. She put it on and I waited 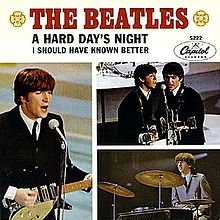 for the famous opening chord only to hear a single drum beat like a gunshot and Lennon sing “Any time at all” immediately followed by George Harrison playing that riff. The first time a piece of music ever sent shivers down my spine. I can still picture the room and garden 50 odd years later. We’d put the wrong side of the album on but what a moment!

Secondary school meant new friends with new tastes and opinions. The Beatles, Pink Floyd (Barrett era), Tomorrow, Jethro Tull and of course, Clapton and Hendrix. The opening to “Hey Joe” still gives me a thrill. The whole “progressive” movement and the 1960’s blues boom was a real golden era. I was too young to see Clapton or Hendrix at the Cellar club in South Shields but subsequently saw both, Clapton many times over the years.

Many of my friends wanted to play guitar. I persuaded my parents to buy me a second hand electric from a shop in Westoe road South Shields which was in the same block as the psychedelic boutique the “Joint”. Subsequently a small amplifier from Goughs in Imeary street. Then sheet music as well as albums were bought from Saville’s in King Street. The first record I bought with my own money was “Black Magic Woman” by Fleetwood Mac and the first song sheet was “Morning Dew” by Tim Rose. I subsequently got to play that with Rose at the Rose and Crown in Holborn South Shields. I later learned that there was a doubt as to how much Tim Rose had actually contributed to the song but he had a hit with it!
I took guitar lessons from a local teacher. Rocked up with my brother Peter (with his Vox electric with tremolo) at the home of the teacher and we had copies of sheet music for “Disraeli Gears” and “Are you experienced”. After a couple of months of “the peanut vendor” and ” Malaguena” we left.

At 16 Crosby Stills and Nash, Neil Young and James Taylor had emerged and after listening to an acoustic guitar sampler featuring Renborn, Jansch, Davy Graham, Gordon Giltrap etc I sold my bike and bought a decent acoustic. A Japanese Terada, a copy of a Gibson Hummingbird. 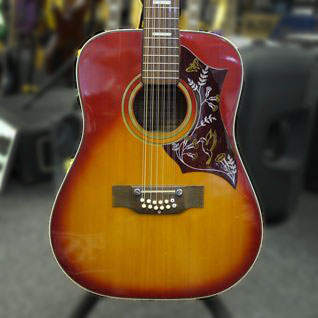 After completing my degree in Sunderland and working in London and the Home Counties I returned and bought a decent electric. A 1972 Telecaster Custom. I always felt the humbucker was underwhelming and this was the era of Fenders that encouraged players to seek older models, so poor was quality control on 1970’s models. I’m amazed at the prices some of these guitars currently fetch as it was their poor quality that started the whole vintage thing.

And that really was the start. I dread to think how many guitars I’ve had through my hands since then. Gibson, Fender, Yamaha, Danelectro, Jap copies, premium acoustics along with really cheap ones. Banjos, Mandolins, Ukuleles, I love them.

I played with friends (Pete Robson and Anthony Wimshurst) at a school dance in Murton as my first ever (electric) gig. I remember girls wanting to talk about the “music” and their boyfriends glaring at us.
We played folk clubs and the like. Memorably I played the South Tyne Folk and Blues club at the old Station Hotel in South Shields with Theresa Brown on guitar and Violin. We did an original song in which I did a guitar solo with lots of string bending. The audience seemed to like it but as I was packing up an older gentleman addressed me with “we don’t like that bending stuff here. You aren’t welcome back”.

With Mick Minchella (bass and vocals), Gordon Railton (keyboard) and Howard Martin on drums (sadly no longer with us) we formed Eddy Groin and the Strains. Shortly to be joined by Cliff Chapman on vocals and our kid on guitar. The band was subsequently augmented by Phil Charlton on harmonica and the incomparable Phil Screaton on guitar and vocals. We did the odd paying gig around Tyneside but mainly played charity functions in which we charged a fee but donated it to the cause on the night. That lasted about 20 years! Mick wrote “One o’clock, two thirty, three fifteen, four twenty blues” and one day it has to be recorded. We jointly wrote “Good times and holiness” and one day that has to be recorded also.
I also worked with Tony Wilson, folk musician and story teller. We played avant garde folk or some other irrelevant description for what was a lot of fun. Tony’s limitless knowledge of folk music was an eye opener for me. Unfortunately despite having recorded stuff at the time I can’t find any trace of it now.

I also worked with Jim Irvine, Folk music legend and his violin playing friend Trish Storey. The tongue in cheek “Cider and Haystacks” and the pillaged “Doddsy’s lament” are included here. We knicked the refrain from something but I have no idea who we thieved it from. However we haven’t made any money from it and if the original author steps forward I promise you’ll get your full credit!

I was fortunate to be involved, via Joe Peterson, in a couple of projects with the customs house. One, headed by the beautiful and multi talented Keith Morris, resulted in a group of myself, Michelle Pope, Alan Kennedy and Steven Taylor (ex Angelic Upstarts) writing and recording a dozen or so songs. One of which, Beautiful Souvenirs, is on my album.

Mick Maloney and Jed Mole are two local, gifted musicians I met in a pub in Jarrow and together we recorded 4 of Jed’s songs on an EP entitled “Circuit and Sea”. When he gets his PRS stuff sorted out I’ll be able to post links to them. Mick is a really tasteful guitar player who is (quite rightly) obsessed with tone and melody. Jed played guitar, keyboards and bass as well as doing all the singing. They are part of one of Tyneside’s now most successful bands, The Moobs.

In 2002 as my private life disintegrated, I got an e-mail from Colin Bradshaw who, with his wife Celia Bryce had successfully played country rock with the Katy Freeway since before country rock was popular. He was looking for a bass player to replace the current incumbent who was leaving. Alternatively Colin would play bass if he couldn’t find a bassist but secured another instrumentalist. I joined, with a rock background tinged with folk. We played all over the north east, had a residency at the Magnesia Bank in North Shields played in Scotland and Sheffield and my proudest moment was when steel guitar legend Al Perkins played with us and we recorded the set.

The other guys were Eddie Harris on drums and vocals and John France on pedal steel, Dobro and guitar. A routine of rehearsing at least one new song a month and regular gigging kept us fresh.

Celia had had her own album out before I joined. I was keen to do original material and one week, Celia, Colin and I went to a cottage in Newton by the Sea in Northumberland to see what would happen. Over 4 days we wrote the bulk of the “Links” Album. A couple of years later we recorded the album at Cluny Studios and formed the Celia Bryce Band with Lee Crammon on keyboard and Eddie from Katy Freeway on percussion. One song “The Workers Song” was shortlisted by listeners to ukcountrymusic.co.uk for best song of the year. The video is included here.
In 2015 we recorded a new song “Mayday 1916” with guitar, vocal and brass band (Gary Young and family) and the video is included here.

And so to date. I have had many tunes I’ve assembled over the years and decided to do my own album. As it says on the liner notes George Waters and I got together and together enlisted the help of some of the best musicians in the north east. Ally Lee engineered and helped arrange the songs. He also played keyboards, bass and percussion and it would have sounded very different were it not for his contribution. The real coup was persuading Sophie Armstrong to sing the songs. Her contribution was way more than just singing and I will be forever grateful to her.

That’s all for now. I will be updating. More music is being written and rehearsed as we speak and I hope to be bringing it here soon!

“Are you who I think you are?” An instrumental recorded by the band we had assembled Kev Charlton (bass), Gordon Hall (keyboard), George (drums and percussion):

“Aching” same line up and another instrumental.

“You can’t have too many guitars” Me on guitars and bass, George on drums:

“The lonely road“. Eddie Harris on lead vocals and drums, Colin Bradshaw on bass, acoustic guitar and vocals, Celia Bryce on vocals and me on guitar. The Katy Freeway line up (John couldn’t make the session or he’d have played the twangy guitar) doing me a favour and produced by the multi talented Rob Tickell. I do hope this track demonstrates what great harmonies this band produced…

See our page on CD Baby